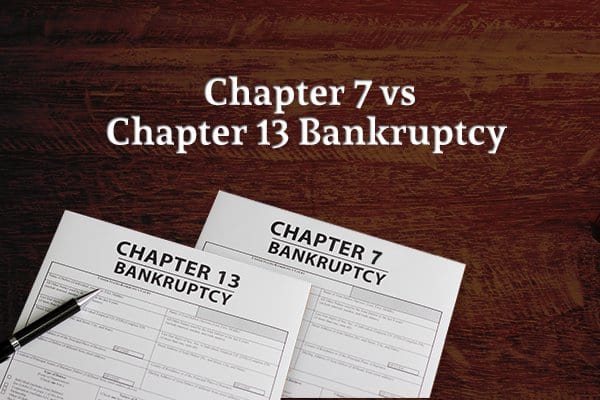 It’s important to educate yourself on the pros, cons, and procedures of each type of bankruptcy so that you can decide on the best option for your situation. Once you’ve gotten some information on your choices, you can visit an attorney who specializes in bankruptcy proceedings to confirm what you’ve decided and help you through the next steps. Read on to learn more about some of the most fundamental differences between filing a Chapter 7 and a Chapter 13 bankruptcy and what you may be able to expect from each process.

The Differences Between Chapter 7 and Chapter 13 Bankruptcies

Chapter 7 and Chapter 13 bankruptcies differ in two main respects. First – and likely most important – is the question of what happens to your debt. In a Chapter 7 bankruptcy, any qualifying unsecured debt is discharged. Secured debt, like a mortgage or auto loan, can either be discharged (which requires you to relinquish the property that secures the debt) or reaffirmed (which requires you to make a promise to continue paying the loan in exchange for keeping possession of the property).

There are also some similarities between Chapter 7 and Chapter 13 bankruptcies. Both can significantly impact your credit score, which in turn affects your ability to take out loans. In general, the higher your score at the time you file for bankruptcy, the greater the drop; so while someone with a 600 credit score pre-bankruptcy may only see a mild impact on their credit score, someone whose score is in the high 700s pre-bankruptcy can see a major decrease. Fortunately, the negative impact on your credit score will ease with time and on-time bill payments.

How Do You Know Which Type of Bankruptcy is Right for You?

The decision of whether to file a Chapter 7 or Chapter 13 bankruptcy is a highly personal one. Some factors you’ll want to consider when making this decision include:

Although it’s possible to reaffirm your debts on some assets, like a car or a home, you may want a completely fresh start. If so, a Chapter 7 can allow you to relinquish your secured assets and start over with a clean slate.

Some debts – such as student loans, alimony and child support, certain taxes or delinquent property taxes – may not be eligible for bankruptcy discharge. Declaring bankruptcy when much of your debt is nondischargeable may not do much to ease your financial burden.

Once you’ve filed for bankruptcy protection, there are strict prohibitions on filing a subsequent bankruptcy within a certain period of time, so getting to the finish line of a Chapter 7 or Chapter 13 and realizing you’ve left out a crucial debt can mean starting over from scratch—or worse, being on the hook for this debt for another 8 years before you’re eligible to declare bankruptcy again. That’s why it’s necessary to hire a lawyer who is experienced with bankruptcy law, rather than attempting to file yourself. An experienced bankruptcy attorney will make sure that all of your debts have been accounted for and that you’ve chosen the best kind of bankruptcy to file for.

If you want to take the next steps toward declaring bankruptcy, Ted Machi & Assoc. can help. Their experienced attorneys are well-versed in complex bankruptcy law and can give you advice that’s tailored to your unique situation.